Personalised stamps feature the life course from birth to special days in childhood and adolescence, and important milestones such as wedding anniversaries, big birthdays and retirement. There are many important moments in life – when something just feels so special that it is worth immortalising on a stamp. 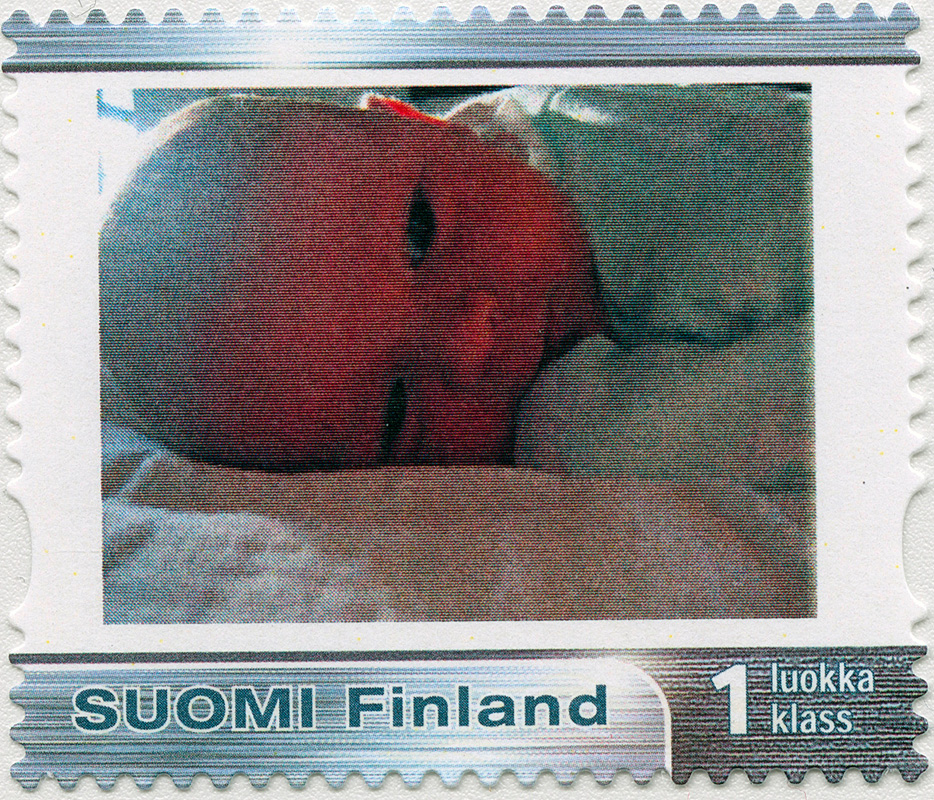 A personalised stamp was commissioned to customise invitations for Johannes Urho Ilmari’s christening. The family and godparents were given a memento of the new family member and the event. 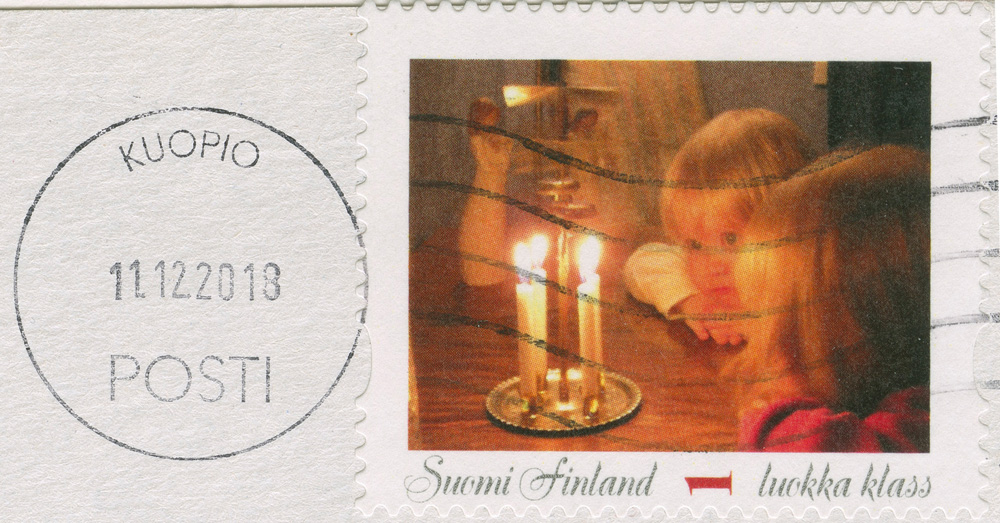 A Christmas celebration with several generations in 2007 is marked by a personalised stamp. The image features two-year-old cousins in the light of an angel candle on Christmas eve. 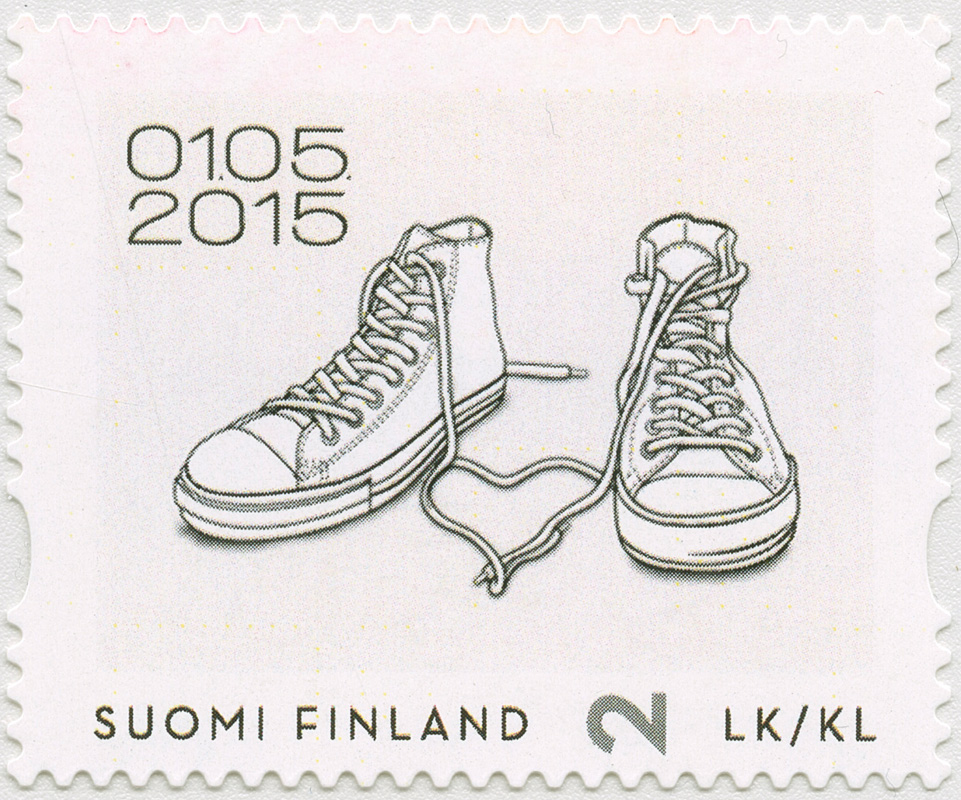 The sender met a nice woman at an evening do at a sports event. The new acquaintances were both passionate about fitness, and they had shared values. It soon became clear that they would spend the rest of their lives together. The love story, which began when they were 50, was sealed two years later with a personalised stamp used on wedding invitations and thank-you cards. The original image was designed by the sender’s brother. The stamp features two lonely shoes connected with heart-shaped laces. The stamp was a great detail on an important day. 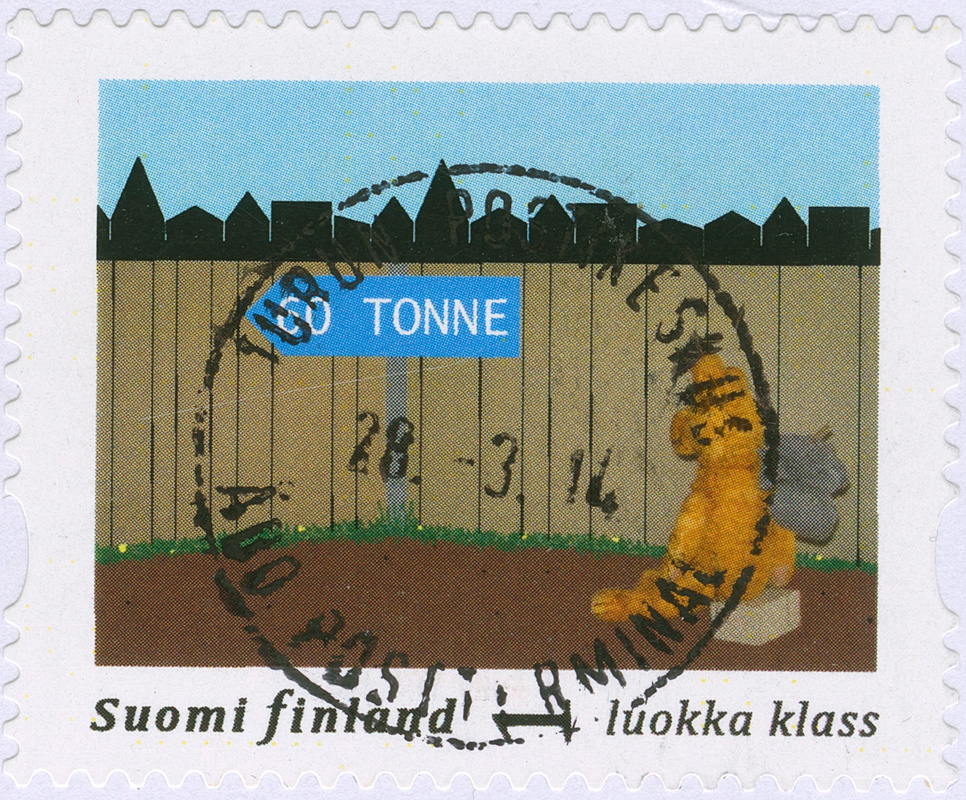 The personalised stamp was created to celebrate the sender’s 60th birthday, which coincided with his retirement. The stamp was used on birthday party invitations and features a teddy bear that the sender had had since he was five. The teddy bear looks at a road sign that says 60 THAT WAY, which reflects the mileage driven and the events on the journey of life. The teddy bear carries a small backpack, as that is all that is needed for the journey ahead. There is a bustling city behind the fence, depicting a break from the busy 60-year journey. 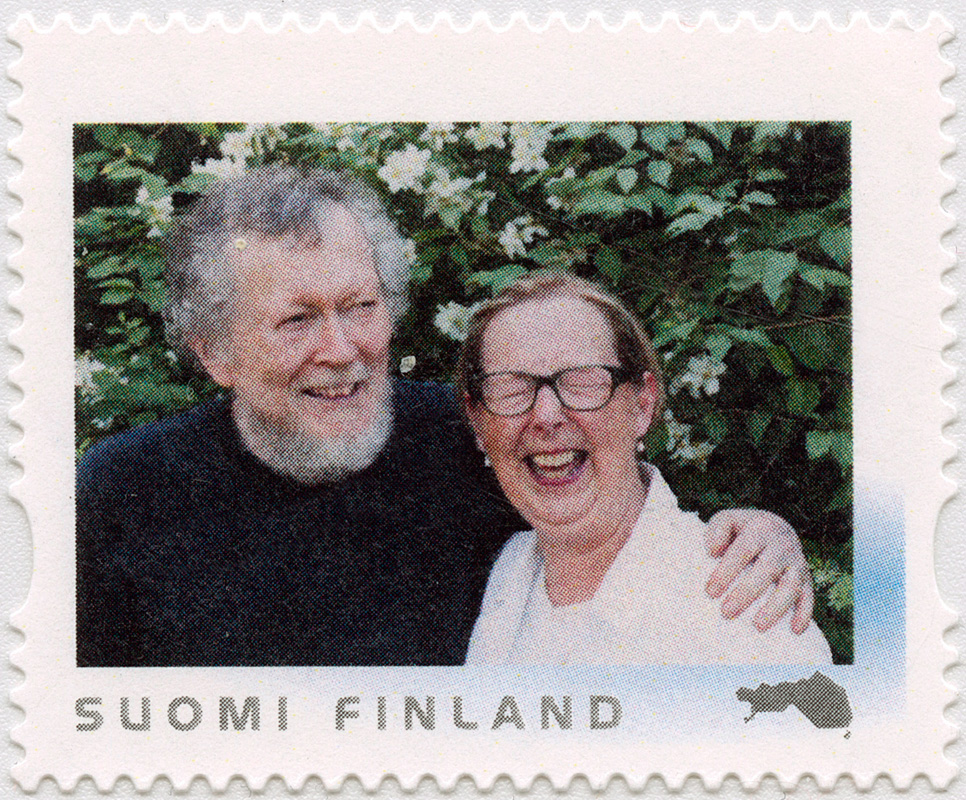 The Covid pandemic year 2020 will surely be remembered by everyone as an unhappy period of time, but on this stamp it personifies the saying ‘no pain, no gain’. The image features a laughing couple, Matti and Eeva Nikulainen. The image, titled ‘The beard grown during the first Covid lockdown’, is so contagiously joyful that it was decided it should be on a personalised stamp.

Story told by a collage

A life can be summed up in one image. This personalised stamp was made from Leena Airikkala’s collage ‘Stream of life’, which is based on the sender’s life with his wife. The pair of cuckoos and the prickly wild rose, ‘Karelian rose’ as it is called in Finnish, refer to the couple’s Karelian roots and their 40 years together. The medicinal herb reflects their professions: one is a pharmacist and the other a doctor. The veiled woman symbolises a married woman, and the Mediterranean landscape in the background the journeys that they have been on together. The two girls are their daughters. The books reflect their hobbies: gardening and cooking. The partially peeled apple on the chequered floor represents their life, only partially lived, with its good and bad times. 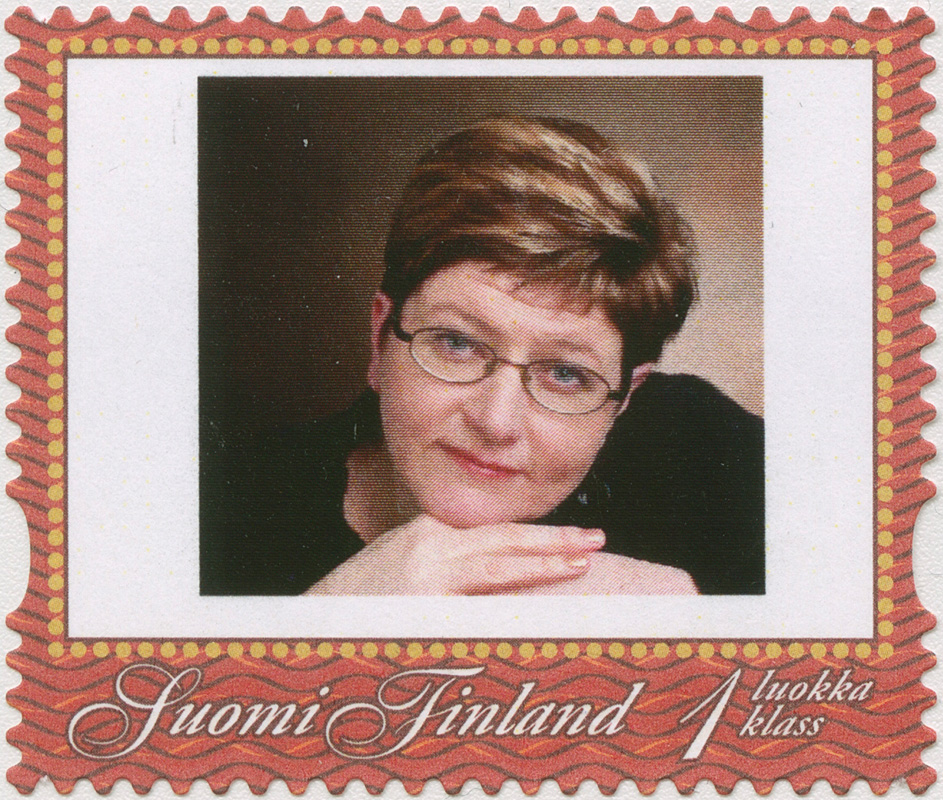 Personalised stamp for a good mood

As well as special occasions, personalised stamps can be used to mark ideas such as a lifelong journey to good self-esteem. The story of this personalised stamp is a great reminder for everyone: Respect yourself and show it.

“It’s a long story but I was photographed for a personalised stamp in January 2004. When I was a child, it was not customary to support a child’s self-esteem, which is why I didn’t have any as an adult. I attended several self-awareness courses and similar. I happened to hear about phototherapy or some such thing, and I mentioned that there are no ‘decent’ photos of me since I was a child. The confirmation picture was never taken, I didn’t take the matriculation exam and I am not married, so there are no pictures of these events either.

“I happened to mention this to a group of people, who encouraged me to have my photo taken. I spent some of the money I was given at Christmas on a hairdresser and make-up before going to the photo studio. I knew the owner from yoga classes and she immortalised me. The idea was for me to go and have my photo taken nearer to my 50th birthday, but I was encouraged to act right away so that my enthusiasm would not wane.

“I sent lots of postcards at the time and decided to use the personalised stamp right away to send cards to my friends. I first sent a card to my friend Riitta and waited for a comment on the stamp. I asked her about it but she had thrown the envelope into the bin without looking at it so the stamp had gone unnoticed. She suggested that I write a note on the cards for people to also have a look at the stamp. Most people were unfamiliar with the idea and many of them got in touch with me, so I ordered more personalised stamps. Things got a bit out of hand when a few friends gave me a birthday present and I spent the money on an enlarged image of the stamp and frames for the stamp and the image. When I moved to Tampere in 2013, I found it in my crafts box, where I had put it and forgotten all about it. I took it out and took a photo of it. I also found two unused personalised stamps.”